In the late 80’s, tag team wrestling was arguably the hottest I’d ever seen in my life. You had great tandems all over the place, from the Midnight Express to the Road Warriors, the Hart Foundation, the Horsemen, the Rockers, the British Bulldogs, and about a thousand others I’m not thinking of at the moment. Those of you youngins not around back then, man, you missed out on a magical period, something that I am certain will never happen again.

A great tag team match is a work of art. There is so much strategy involved, so much psychology at play, so much that creative minds like Jim Cornette and the Midnight Express and their rival Rock & Roll Express could do to really get fans invested into what was happening in the ring. I know I’ve told this story a thousand times, but again, this type of action is what got me into wrestling in the first place, as I saw a Bulldogs-Harts tag team match one night on the USA Network and that turned me into a pro wrestling fan for life. 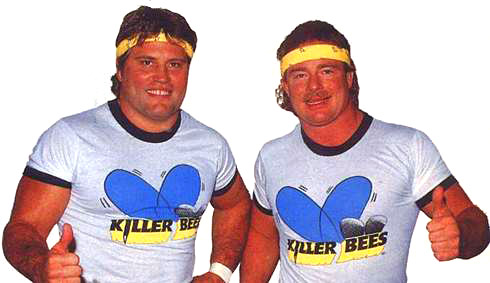 While you had the top notch tandems I listed above, even the teams a notch or so down were a lot of fun to watch. One of those teams was B. Brian Blair and “Jumping” Jim Brunzell, collectively known as the Killer Bees. The pair weren’t quite jobbers, but they weren’t quite champions either; they were just in the middle of card, plying their trade in a manner I viewed as average at the time. Today, they’d likely be considered world beaters, simply because they completely understood the concept of tag team wrestling and could properly execute all the subtleties that make it great.

As I said, though, they were viewed as nothing more than adequate at the time. Eventually the pair came up with a gimmick (reportedly given to them by Billy Red Lyons) which involved putting on masks so that neither their opponents nor the referee could tell them apart. It was dubbed “Masked Confusion” by the announcers and it was…fine, I guess. Let’s call the Killer Bees without Masks ** and the Killer Bees with Masks **¼.

(Note to all the geeks, nerds, and poindexters out there: if you ever were confused by what makes up a ¼* difference when Dave is rating matches, please use the images above as a reference.)

After a while, it was decided that other wrestl…err, SUPERSTARS get in on the fun with Blair and Brunzell. So you can imagine what was going through my head when I saw this on a recent Prime Time I was watching: 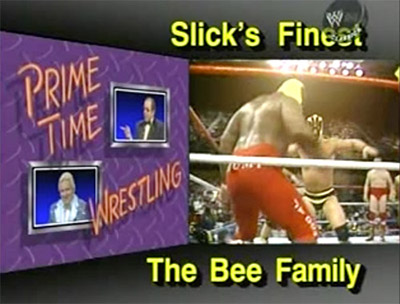 Slick’s Finest vs. The Bee Family?

Everyone got their ¼*’s at the ready? 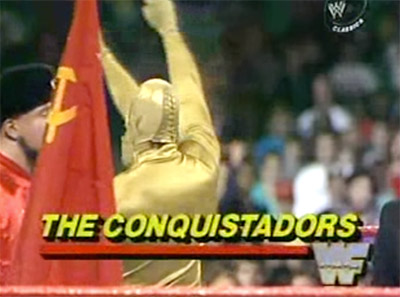 Before we meet the BEE FAMILY, we first meet their foes this night who are, to quote Howard Finkel, “from SOMEWHERE in Latin America.” You see, kids, apparently in 1988, maps existed only in exceedingly rare form, with no real countries listed. Instead we got home “towns” such as “Latin America” and “The Orient.”

Thankfully in the year 2015, Vince McMahon is coming around to the idea of Japan. We’ve done our best to chronicle this momentous occasion, which you can read about here. 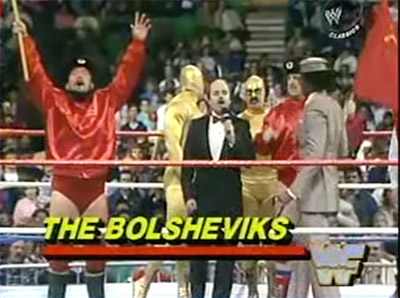 They are joined by The Bolsheviks. Amazingly, this pair aren’t announced as being from “Somewhere North of Persia”.

Hey guys, before we get to far into this, question: How do the Bolsheviks teaming with the Conquistadors, who I’m pretty sure were never under the Slickster’s employ, possibly classify in any way as “Slick’s Finest?” 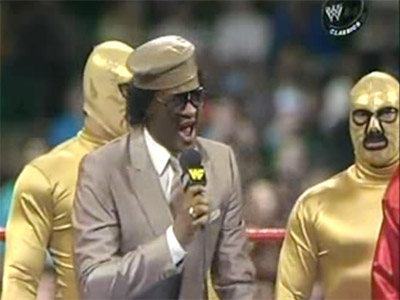 I mean I’d personally classify that hat as “Slick’s finest.” And I have no idea what it is even supposed to be. It almost looks like someone tried to make one of those fancy chef hats but made it way too brown and way too small. Still, he’s the doctor of style and I’m not, so I will have to defer to his fashionability.

Regardless, their opponents this eve would be THE BEE FAMILY: Jumpin’ Jim Brunzell, B. Brian Blair, The ANIMAL BEE, and JYDB. And as Howard Finkel hails them as such, smilin’ babyface cheerleader announcer Vince McMahon laughs like it is literally the funniest thing he’s ever heard in his entire life.

Over the years, I’ve come to learn what Vince finds humorous. With that in mind, I suppose it is possible that this was in fact the funniest thing he’s ever heard in his entire life.

And something like this would no doubt make him laugh.

And I will admit: B. Brian Blair doing the whitest constipated white man dance in history kinda makes me laugh too.

Sadly The Animal Bee does not join in the festivities. Instead, he just stares at the camera. 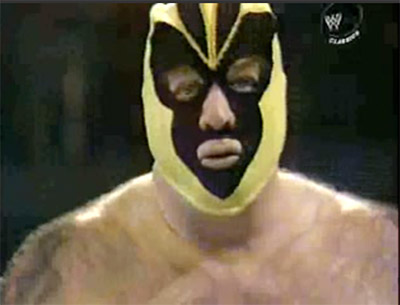 He stares at the camera in such a manner as if to say, “One time I met with a psychiatrist on that idiotic TNT Show. He placed a metal salad bowl on my head. We pretended that I was getting shock therapy. The doctor asked me to say something intelligent. I responded with the sentence, ‘How now brown cow?’ Lou Albano applauded. It was somehow less embarrassing than what I am doing now.”

Vince: “I’ve never seen an Animal Bee. I always thought a bee was an insect.”

I guess in Vince’s world an insect is not an animal.

Someone get this man to a zoo.

I mock Vince, but he’s nothing compared to Bruno. I remember in the 1980’s, I thought Bruno was the worst commentator I’d ever heard. Now? Honestly, I’ve grown to appreciate the wanton, unapologetic, abject horrendosity he displayed. I’m talking such gems as completely butchering the name “Conquistadors” and asking Vince if they should call George “The Steel A Bee.”

THE STEEL A BEE!

Ain’t no two ways about it. 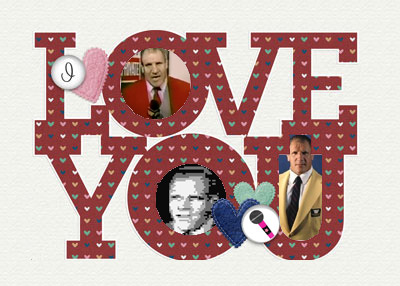 So the match starts and…

…we get Brunzell in the ring (I can tell them apart, even if Vince, who was employing both men, can’t) as the men in gold bounce around in a manner that would make the Keystone Cops proud.

I know everyone ’round these parts whines and bellyaches about a lot of things missing in wrestling today (decent announcers, truly vile heels, logic of any shape, size, or color), but masked bad guys being foiled by somehow colliding into each other is by far at the top of my personal list.

I mean, just looking at that stupid animated GIF above brings a smile to my face. 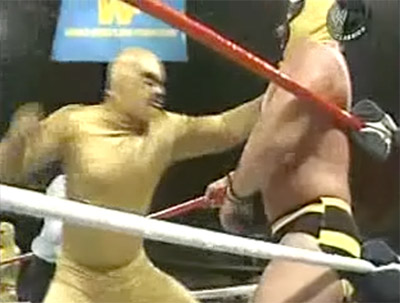 The Conquistadors take over quickly however as they do a switcharoo outside the ring. Despite the fact that this was the entire gameplan for nearly any Killer Bees victory of the day, Vince is APPALLED at such tactics. Super babyface cheerleader Vince McMahon is also something I oddly miss these days. Not as much as crazy Bruno “what on earth did you just say? Please repeat it because honestly I have zero clue” Sammartino, but still.

Oh, and if you thought this was going to be a standard squash, no no no no. Not the case. Like, at all. What was a one-note joke (ok, maybe two since you had both the Dog and the Animal in there), somehow winds up going through a commercial break! 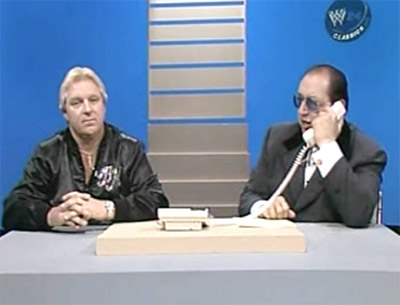 Gorilla and Bobby can’t be bothered to talk about the match (can you blame them?), with Monsoon instead on the phone looking for Jesse Ventura, who apparently is making a movie about a prison. He asks Bobby to throw it back to the match and the Brain deadpans, “back to the match.”

I want to hear more about Jesse’s prison movie, as I legit have zero idea what it is! 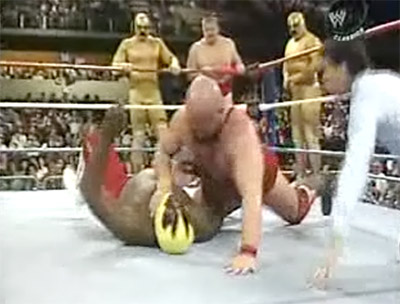 Instead, back to the arena we go, where we find Boris Zukhoff choking JYDB… 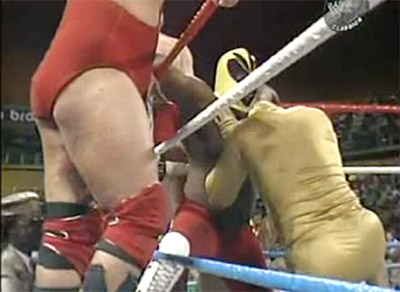 …followed by one of the Conquistadors gently massaging his chest. Up next we get no less than THREE tags that the referee misses. Pretty sure that I went through four years of college, got married, and had a child during this heat segment.

In fact, it may still be going on. 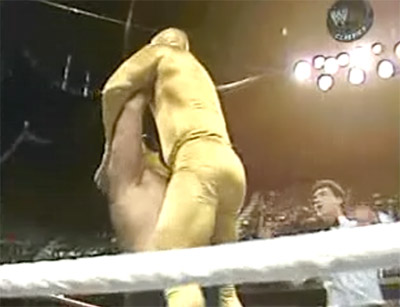 A wayward knee to the wrong man FINALLY allows the Animal Bee to enter the ring and he proceeds to clobber the Conquistadors with bites and hanging chokes. As I look at that image above, for some reason I thought, “why doesn’t someone like Braun Strohman use that as a finisher?”

My brain immediately answered that question with a question, the new question being, “Why on earth am I thinking about Braun Strohman?”

To which my brain retorted, “That’s what this horrible match has driven us to!”

No idea how that GIF was able to make JYD look so nimble and athletic. Has to be a glitch.

Ugh, what a horrible way to end this induction.

But not as horrible as that match.

Hacksaw Jim Duggan In Having A Beer With Mike