This induction has literally been years in the making. That doesn’t mean it will be good. It may be horrible. But I say that it IS something I have been wanting to do for years and could never do so. Why? Because I could never find footage of the legendary WCW superstar known as BASKET CASE.

Basket Case, you are my unicorn.

Rest assured, I knew he existed. Most folks didn’t. Want to impress your wrestling nerd friends? Ask them if they’d ever heard of him. For sure they’ll say no. Or they’ll say yes, and you can call them a liar. As for me, I had vague recollections of him on WCW Saturday Night. I knew it was future WCW tag champ Mark Jindrak (known today in Mexico as Marco Corleon) as well. But more than anything, I remember the utter goofiness of the character. Why it brought to mind other past failures such as… 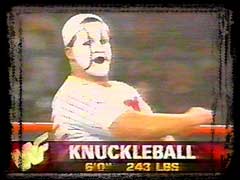 As I noted in his original induction which I wrote like 18 years ago, this would be Steve Lombardi doing his darnedest to look exactly like Mr. Red. 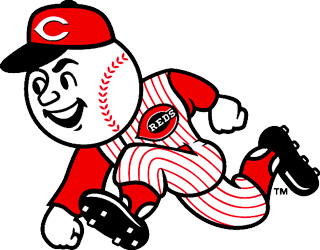 And failing. Because Mr. Red was the BOMB. 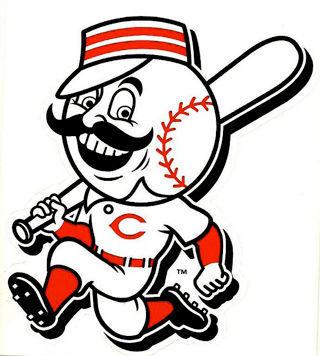 Had the Brawler come out with a giant handlebar mustache’d version of Mr. Red, the incredibly awe inspiring Mr. RedLEGS, he’d have gotten a pass from me.

As for his backstory, Vince came up with the character primarily to mock Major League Baseball, who was going through a strike at the time. You see, because the WWF would NEVER dare go on strike!

I mean, they couldn’t since they weren’t unionized, but still! 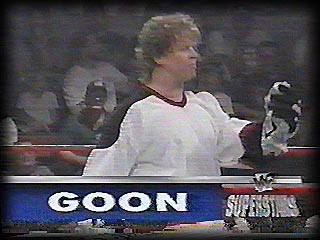 There was also The Goon, or I guess according to his chyron, just Goon. My apologies, I’ve always stuck a “THE” in front of his name. Don’t I look silly. I mean, not as silly as the guy dressed up as a hockey player (complete with wrestling boots that resembled skates!), but still!

What is it with me and “but still!” today?

While we lambast Vince McMahonland for their silliness, WCW did get in on the act from time to time as well. Not only with our induction today, but also with… 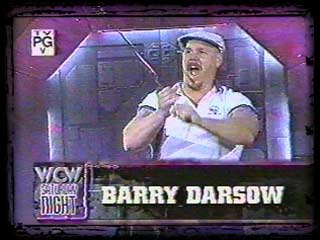 “MR. HOLE IN ONE” Barry Darsow! While I’ve long trumpeted his stint as the Repo Man (in an induction as recent as this one), doing research for this article has given me pause as the mystical time the former Demolition Smash was an EVIL GOLFER was magical indeed. Having a putting challenge prior to a lock up? That’s just good form.

While all those have been inducted in the past (and are in the WrestleCrap archives, available here), today we tackle someone who has yet to get his proper recognition.

It may have taken nearly two decades, but today BASKET CASE IS INDUCTED! 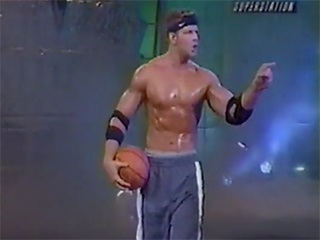 Hear me out, because while this character lasted on a month or so, it was absolutely great.

Maybe even better than I remembered.

Sadly, in the match the great Jordan Mishkin (he of Headlies fame on this here site) unearthed for me, he was introduced as simply Mark Jindrak. Doesn’t matter. 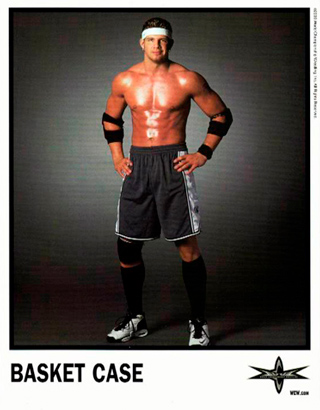 YOU’RE FOREVER BASKET CASE TO ME.

Why? Because I have this (sadly unsigned) publicity shot to prove that he was in fact to be dubbed as such. Why he was not hailed as such in these bouts is unknown. I think this is where the cool kids say, “Because WCW.”

I’ll attribute it to an unfortunate clerical oversight.

And can you imagine if this match took place on Nitro? With Michael Buffer doing one of his overloaded gooftastic introductions? My skull is bursting at the seams just trying to help my brain contain what could have been.

While Goon (shew, can’t believe I remembered to drop “the” there) would wear wrestling boots disguised as skates, Basket wears actual, honest-to-goodness high tops, looking as though he literally just came off the court after schooling some intramural geeks. Prior to engaging in fisticuffs, Mr. Case calls a quick time out so he can tie his shoes.

No no no – you tie your shoes AFTER the match in celebration!

Did Bret Hart not teach you anything?

Finally, it’s time for the match to start, and we get what may well be my favorite spot to take place in a wrestling ring EVER, as Basket Case circles his foe…

…and then throws his ball right on top of Reno’s noggin.

While flinging a leather ball right in his foe’s bald cranium is the first thing you see (and then laugh at for 5 minutes straight if you’re anything like me), don’t miss the minor details. It’s very clear Basket is walking around with the ball, so I have no question Reno had a good idea how to thwart this. However, Reno was thrown off his game plan by Case pointing at his feet. This causes Reno to rightly look down and become susceptible for such an attack.

Better yet, the referee ALSO looks down. No idea what BC may have said, but I bet it was clever. Something like, “Hey, look down!”

Why has no one tried that since?

In this match Reno was able to rebound (ha, see what I did there?) and take advantage, forcing Basket to head to the outside, where he attempted to shake off the damage.

And by “shake off”, I mean pretend to drain a three pointer.

Which apparently hurt his wrist.

So our hero gets back in the ring, and takes over on offense which he celebrates by…

And then we get ANOTHER one less than a minute later.

WE GET IT – YOU’RE A BASKETBALL PLAYER!

And obviously, not a very good wrestler, as you got pinned by a guy…

…who did this drop kick. Holy crap.

Of course, Jindrak would improve, and honestly, improve GREATLY. 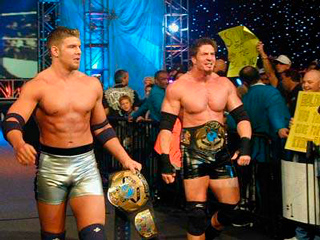 In his WCW days, he wound up with the world tag team titles with Sean O’Haire as part of the Natural Born Thrillers. Following that company’s collapse, he found himself in WWE, where he was very nearly a major star. Get this – he was originally planned to be the heavy in Evolution – in fact, vignettes were filmed with him in that role. Instead, he lost the part to this guy: 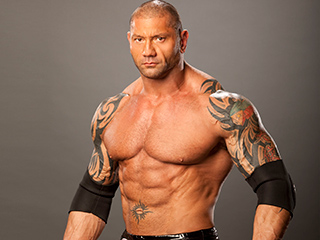 Yep, in an alternate universe, Drax the Destroyer could have been played by BASKET CASE.

Man, I’ve never been so depressed thinking of what could have been. I don’t think anything will ever cheer me up.

Vito In A Dress