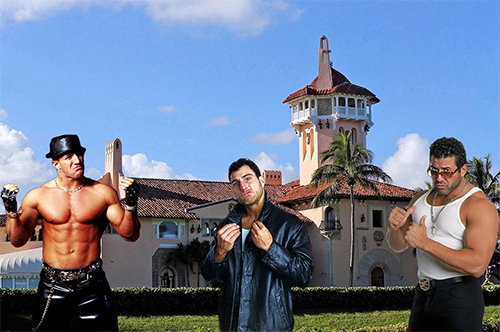 The F.B.I. ran through the expansive residence without much resistance from underpaid security or club members. Joined by Chuck Palumbo, and Johnny “The Bull” Stamboli, Nunzio led the group in ransacking the opulent home. Silverware was stolen, coasters were not used, and self-tanner was spilled all over the carpets.

“Hey, Boss. Check out this giant golden cup I got. It has free water in it and everything!” said Stamboli, drinking from a gold-plated toilet he had pulled out of a bathroom.

“You knucklehead, put that down!” chided Nunzio, before bonking Stamboli on the head.

“Nyuck-nyuck-nyuck!” chortled Stamboli as the toilet crashed to the floor.

Former WWE Tag Team Champion Chuck Palumbo drove his motorcycle through the hallways, scuffing up the marble floors. Occasionally, he would stop to punch holes in the walls and rip out the copper wiring.

“Hey, Boss! Check out all these boxes I found in the basement!” giggled Stamboli. “It’s got these funny numbers all over it. I think it’s one of those Sudokus!”

“I’ll Sudoku you, you Chowderhead! Those are nuclear launch codes!” yelled Nunzio before pulling on Stamboli’s nose. “These could be worth billions!”

“You need to go back to therapy,” said Stamboli quietly, rubbing his nose.

Following the successful raid, the F.B.I. publicly vowed to invade the homes of other wealthy, disgraced business leaders. In response, Vince McMahon’s condo in Boca Raton has increased their security.