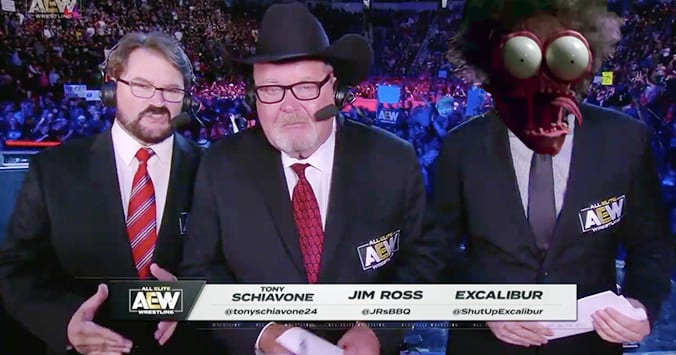 Miami, FL – All Elite Wrestling announcer Excalibur removed his mask at a company meeting this morning, terrifying and sickening his fellow employees.

The former wrestler, who still wears his luchadore-style mask while calling AEW matches, addressed the group.

“I’d given a lot of thought to what Brandi Rhodes said to me on last week’s show,” said Excalibur. “Ultimately, she’s right. It’s silly for me to wear a mask. In order for people to take AEW as a serious wrestling promotion, I need to become serious as well.

With a deep sigh, Excalibur took off his mask, revealing a face for classic literature.

“I’m about to boomer my Sooners!” gagged legendary announcer Jim Ross before vomiting into his cowboy hat.

“That is the most horrifying thing in all of sports entertainment!” screamed fellow announcer Tony Schiavone. “It’s like a Picasso painting come to life!”

Eyewitnesses have described his face as “something created by Tom Savini” “Lovecraftian” and “a twitching, misshapen mass of unnameable horrors.”

“It was like a garbage truck dropped off the Empire State building and landed on his face,” said a pallid Cody Rhodes.

Following the revelation, Excalibur said, “After all these years, it feels good to finally be myself. It will be nice to finally take a shower without this thing on.”

AEW officials are currently considering putting a giant X on the screen whenever Excalibur is shown on camera.