I know what you’re thinking: “Art, didn’t you already write up that softcore Sable tape?” 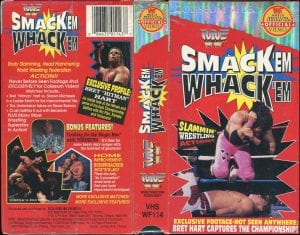 But in fact, this tape came out in 1993 and featured the WWF’s first-ever ladder match, Bret Hart’s first-ever world title win, and, curiously, a series of special segments interspersed between matches called, “Cooking for the Single Man”, featuring Yokozuna.

These segments promised “heavy duty recipes” with the sumo champion.

No doubt more than one video store shopper was disappointed to find out that, instead of Yokozuna donning a chef’s hat and instructing the viewer on how to make a fine crème brûlée for one, he would simply be sitting down at a Japanese restaurant with his manager, Mr. Fuji, and Gene Okerlund.

See, it’s not a cooking segment, it’s an eating segment.

Back before WWF fans knew much about Yokozuna and his many unique quirks (such as his fear of caskets), they knew only that he weighed 505 pounds… 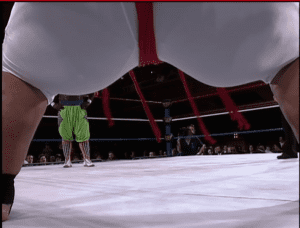 …which, while svelte compared to his later career, still made Yokozuna without a doubt one of the heaviest wrestlers in the world.

But besides being fat, being heavy, and having “an ass like an amphitheater,” there was something else important about Yokozuna that fans absolutely needed to pay their hard-earned money to find out:

Yokozuna ate a lot. Watching these segments, it’s easy to see how Yoko quickly managed to fill out those tights that he’d had to stuff with padding in the early days. 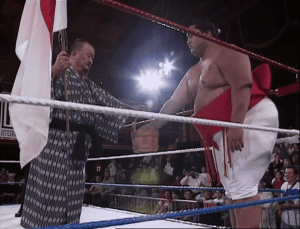 So the premise of these segments is that Mr. Fuji, gracious host that he is, has invited “Mean” Gene Okerlund to dinner to witness first-hand Yokozuna’s training regimen. 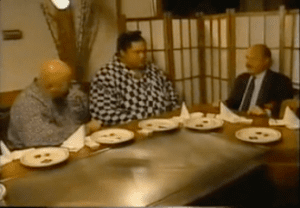 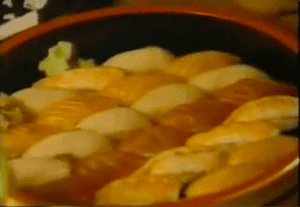 Okerlund does work up the courage to try this exotic dish, dipping it wasabi at Fuji’s request…

…but it doesn’t work out well.

All the while, Yokozuna is laconic, uttering only a few words here and there in Japanese.

“Some of the things he says in Japanese, I don’t understand.” My guess? It’s because they’re in Japanese, Gene.

Okerlund can’t get the hang of those unwieldy chop sticks…

…but Yoko works them like a champ, showing his dedication to the Japanese gimmick..

In a classic eating montage, Yokozuna shoves morsel after morsel into his mouth, although at times it looks like Coliseum Video reused a lot of footage.

This is just the beginning for Yokozuna, says Fuji. Next, a chef flown in specially from Japan will cook a big feast for Yoko. 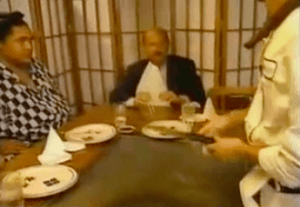 Sure enough, the Japanese chef shows up and, after some knife tricks, explains that he will be cooking steak for ten people. 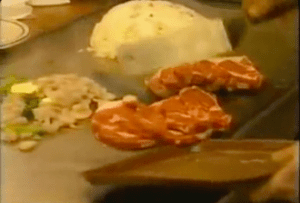 “We couldn’t possibly have steak for ten people,” says Gene, having learned nothing — nothing— from this dinner so far. 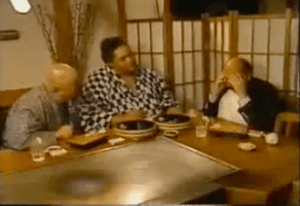 Further undermining the viewer’s faith in Gene’s intelligence, Okerlund notes how hot the grill must be. Then his dumb ass tries to touch it…

…although, in a more literal sense, his hand tries to touch it. Fortunately, Mr. Fuji intervenes…

…but Yoko tries to stick Gene’s hand right back on there.

They do things strange in the Orient – raw fish, grills hot enough to cook food on, etc.

Mr. Fuji explains that he loves to see his Yokozuna happy, and that his Yokozuna is happy when he eats. Therefore, it’s understandable that Fuji cracks the whip on the chef to get him to hurry up and cook more food.

As Yokozuna downs about a dozen steaks, Mean Gene still doesn’t quite understand this segment’s theme — that Yokozuna can eat a lot of food. 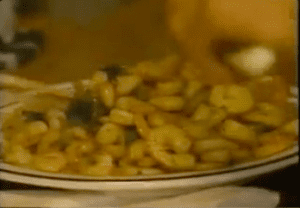 After what must have been hours of watching Yokozuna eat, Gene finally gets it. 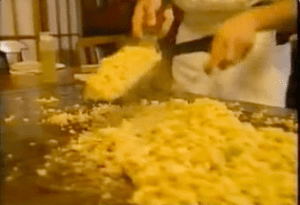 “Look at the rice!” says Gene. Just think of what David Crockett would have had to say. 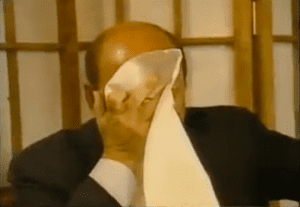 By the end of the meal, Gene is stuffed to the gills and can’t imagine how Yokozuna must feel right then. All I can think of is the aftermath of Yoko’s gargantuan meal — talk about Wrestlecrap! 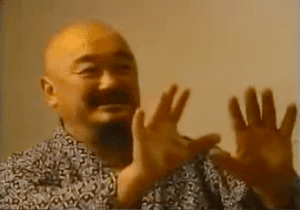 But Fuji wouldn’t dream of letting Gene go without dessert.

While Gene is simply overwhelmed, Yokozuna, a man of insatiable appetites, flirtatiously winks at the unseen treat. Ooh la la!

You know, ladies, it is called Cooking for the Single Man.