A few weeks back, during an induction about the first WWF video game ever made, I dropped in a note about how I am now helping to run The Skycade arcade at The Skyline Drive In in Shelbyville, Indiana. It’s been a fun endeavor, and I urge everyone to come and check it out when you get a chance. It’s been a fun way to spread my wings a bit, and more importantly, let games I own out into the wild, so that more than my family and our handful of friends get to play them. We have a WWF Royal Rumble amongst the five (soon to be six!) pinball machines, duelling Hydro Thunders, and several arcade machines as well. You want to play WWF WrestleFest? We got ya covered.

This spring has been a crazy one here in my neck of the woods, with tornadoes and heavy rains being a near daily occurrence. Thankfully, we’ve had no damage at the drive in. I mean, if that game room were to flood, I think I’d be a total wreck.

Remember Mike Knox? The guy who introduced Kelly Kelly, the world’s least effective stripper, to the world in the early days of the WWE version of ECW?

Wait, not it wasn’t. That was completely idiotic. How have we never inducted that?

And why do I write that exact same sentence in seemingly every induction? 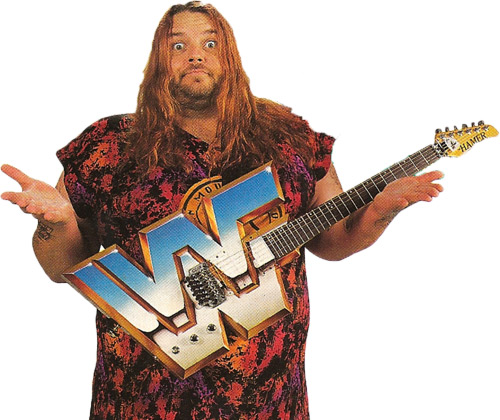 Well, anyway, fast forward a few years as Knox had left WWECW and headed to the more fertile (because they were covered in crap) pastures of TNA Impact Wrestling! As one of the founding members of the legendary Aces and Eights (another one that we need to cover), the cleverly renamed KNUX had been a force in Dixie Carter’s play land. Sadly, his merry band of mischief makers was forced to disband following a storyline that felt as though it had been going since the Nixon era. Left to meander about with no real focus in his life, Knux seemingly disappeared from wrestling.

In the spring of 2014, we would learn why; his family was in trouble, and he needed to head home to help save the ranch. 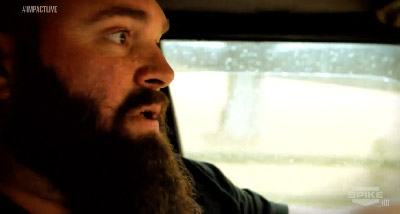 A car ride, one really atrocious country song, and far too many extreme close ups of his lower eye socket area later, we learned that a girl named Tanea had gotten a hold of Knux and explained to him that his hometown had flooded. And that was trouble, as we learned that the high tides had caused ruination of his family’s business:

The worst carnival you ever did see.

On the plus side, we got a horse staring at us for an uncomfortable amount of time. You know how WWE likes to leave the camera on wrestlers for too long when they are done talking in an interview?

This horse does too. 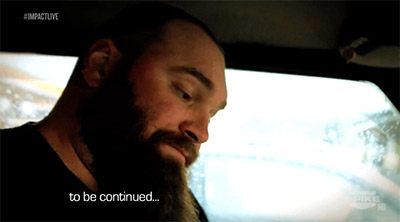 Knux further explains he left home to become a wrestler, a career choice of which his father didn’t approve.

Let me repeat that: his father, who was a CARNIE, did not approve of him being a PRO WRESTLER.

Mrs. Deal! Get Kizarny on the line! If anyone would know about this prejudice, I bet he would! 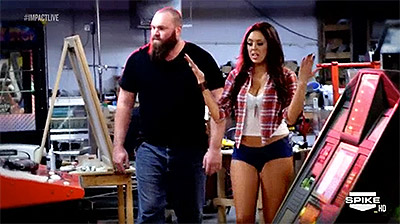 So Knux makes it back home and HOLYTOLEDOLOOKATTHOSESHORTS.

The most amazing part is that Tanea is wearing those whilst she is explaining to Knux what a disaster this flood has been for the family. The way she warbles on makes you believe the family has hit absolute rock bottom. It wouldn’t surprise me to hear her explain that Pappy Knux died from all the stress.

I wonder what she’d wear to the funeral. 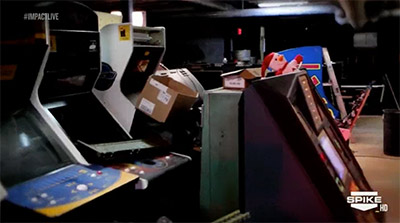 As we get a pan of the game room, Tanea bemoans the fact that “our money makers don’t make money anymore.”

Yep, I bet that Golden Tee with a missing a monitor and no trackball was just raking in the quarters prior to the flood! 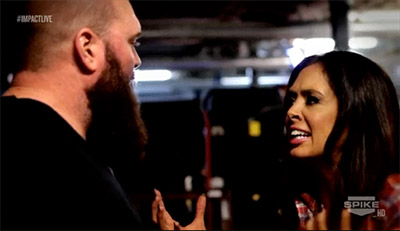 Teary eyed but undeterred, Knux notices a working jukebox that still played their song. This simple note began the two on a path back toward being a couple. In the following weeks, as Knux and Tanea grew closer, their acting somehow became even insane, leading to some of the craziest thespianism ever witnessed on television

So we got to see Knux and Tanea hanging out with friends and family as they bonded. A particularly touching moment was when Knux noted how he was thrilled that she had learned how to twirl fire batons in his absence.

I would like to note, for the record, that in this sequence, the following dialogue was recited:

“Yes, I am extremely proud of you,” he proudly stated. 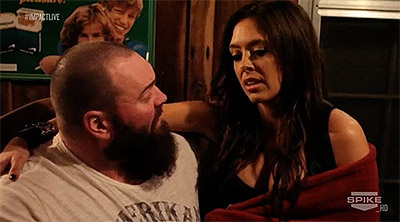 Despite their now blossoming love, Knux explains he needs to go back to what he is best at, and that is pro wrestling. Tanya nods, and says that she not only understands, but wants to join him on the road.

“You want to leave all this behind?” Knux asked.

ARE YOU SURE TANEA? 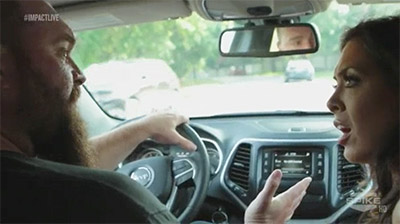 So they hop in the car and hit the road, with Knux explaining that not only does he want Tanea traveling with him, but he wants her in his corner. Actually, that’s not entirely true. “I don’t need Tanea,” he philosophized. “I need Rebel.”

She knew what her man needed. And she was ready.

“You’re gonna get all the Rebel you can handle!”

Knux wasn’t done, though, explaining if they were going to be a success and thus send money back to his carnie old man, they’d need more.

Rebel: “The Freak? ABSOLUTELY FREAKING NOT!”

But his mind was made up – they were going to get them.

Could a pro wrestling debut possibly live up to weeks of broken down arcade machines, carnie family drama, and shorts so tight they had to have ruptured fallopian tubes?

Time to cue up the pyro and ballyhoo! 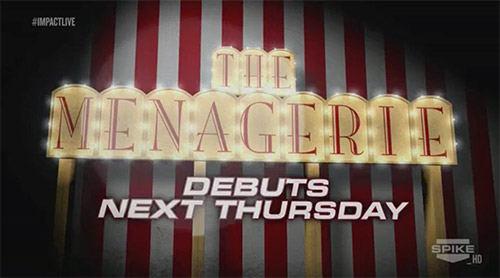 As circus music filled the air, the motleyist of motley crews made their way to the ring!

First was Rebel, who apparently lost her fire batons on the trip to Orlando. Boo! Anyway, she was accompanied by goofy looking stilt walkers, who I dare say looked identical to the ones you see walking around Universal Orlando, which is where the Impact Zone used to be located.

Before, you know, Dixie was evicted.

But hey, let’s not focus on the negative!

Not when we have Crazzy Steve! He’s a clown! Not only does he have face paint, but also balloons and a horn!

That’s how CRAZZY he is!

Every respectable carnival has to have a muscleman, and this one delivers with THE FREAK! Why if I didn’t know any better, I’d think that was Rob Terry, who’d been with the company for years and years before this, under the mask!

Taz: “Man! They must have good gyms at the old circus!” 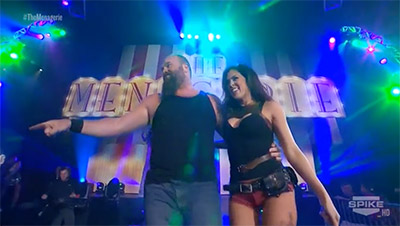 Knux, who just kinda walked down to the ring.

Sorry, if that’s all you’re doing, NO ANIMATED GIF FOR YOU!

Besides, I need to save that bandwidth for this: 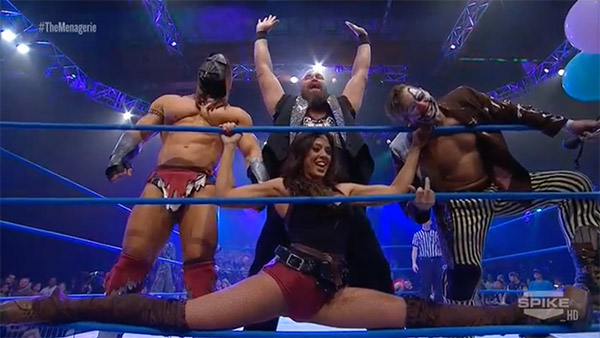 And not just because Crazzy Steve is flipping us off. 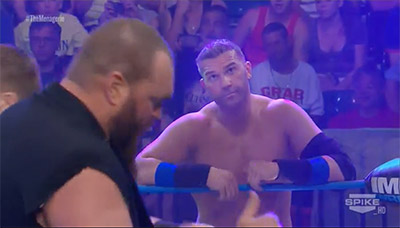 Amazingly, not everyone was impressed. Poor Frankie Kazarian. Not only did he have to attempt to carry Knux in their debut match, he had to then attempt to get something, ANYTHING, out of Crazzy Steve the following week.

Dude is great. But he’s not THAT great.

Eh, seeing him take that bump off that set up, maybe he is that great.

Speaking of greatness, I have to make note of Taz’s call of the action. I don’t know how he managed to do it, but his “Oh no, the oldest trick in the book right there” is the most amazing display of being simultaneously bored and yet somehow amused in a manner in which he knows he shouldn’t be.

You want to talk underrated announcers in wrestling history? Taz is up near the top of the list.

…with the clown pulling down the ref’s pants for the DQ as Rebel hung upside down in the ropes.

Sadly, following a couple weeks of being a featured attraction, The Menagerie just kinda fell into obscurity. They would wrestle matches here and there, rarely winning, and as TNA’s financial situation became more dire, their entrances became less and less elaborate. Rebel wound up breaking her arm in a battle royal, and the group more or less vanished in the fall.

In a match one year and one month from their debut, we were given an update on their whereabouts, with Mike Tenay telling us the word on the street was that the Menagerie had gone back to the carnival.

You know, the one that was broke.

One can only hope that all the money they made was enough to repair that Golden Tee.