As I look at that image above, I am half tempted to just hit the “publish” button and be done with it. And if you think I am joking about that, consider the fact that I had this in my draft folder for over a week contemplating doing just that.

But it seems only appropriate that on the eve of the arrival of the new Death of WCW: 10th Anniversary Edition to WrestleCrap HQ (I will have received my copies as you read this) that I would go ahead and write something more. How much that will be, I really don’t know. This is one of inductions where we won’t be concentrating on having a bunch of images, animated GIFs, sound files. That’s not really viable here as I am writing about something that transpired over a period of approximately 5 minutes or so. But in those 5 minutes, Vince McMahon and WWE flushed away so much cash that it’s impossible to measure.

I admit sometimes I get carried with the business aspects of wrestling. Ever since I wrote the original Death of WCW with Bryan, it’s something I’ve not really been able to shake. Believe me, there are times when I know I’d enjoy wrestling more if I didn’t concentrate on the business of it. Amazingly, though, Eric Bischoff’s WWE debut would not be one of those occasions.

Because honestly, as a fan, and a fan alone, I absolutely hated this angle. HATED it. To me, it was yet another opportunity to somehow, some way, salvage the whole fiasco that was the InVasion angle. Speaking of, why did they spell it that way? With the capital letters? Mrs. Deal, get Dave Meltzer on the…aww, forget it. I’m sure it was some ridiculous reason not unlike when they’d spell everyone’s names with Y’s and Z’s. ChYna! RhYno! Dudley BoyZ! For as much as folks despise the whole “WWE Universe” terminology, it’s nothing new. Just be glad they don’t spell it some silly way like “WWE UnEVerse”, because I could totally see them doing something like that.

Where was I? Oh yeah, this. 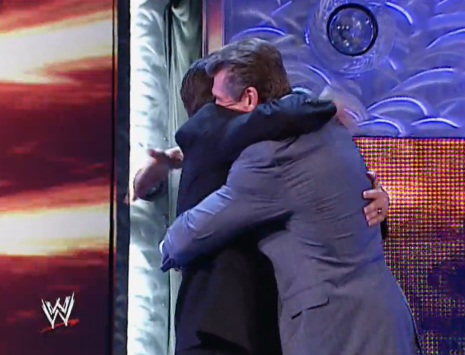 Ok, a bit of backstory. There may be folks around here that didn’t live through the whole Nitro vs. Raw era and don’t understand exactly what happened back then that made this so infuriating. Maybe you’re trying to educate yourself to what happened by watching the Monday Night War series on the WWE Network. If that’s your plan, let me save you some time and give you that version of the story:

– WWE was doing great except they had a handful of bad characters that served as the basis for WrestleCrap.com

– Folks were CONFUSED so they started watching Nitro

– Eventually, Degeneration X came on the scene and attacked WCW which made everyone realize that WCW sucked mainly due to Triple H being such a stud

– Vince then defeated Evil Ted Turner by buying out the company

I don’t think I missed too much from what I’ve seen so far. It’s sorta infuriating, but hey, the won the war and thus the victors get to tell their version of history. Kudos to them. If you want the REAL version of what happened, well, y’all know where to go.

Where was I? Oh yeah, this.

Ok, a bit of backstory.

Didn’t I just write that? I keep getting distracted by things that the company has done or is doing that are driving me mad.

Let me try this again. During the grand time that Raw and Nitro were going head to head, each side did their damnedest to make their show the one to watch. When Nitro was first announced, there were a lot of folks who thought that it was a completely idiotic move by WCW and that they were going to get slaughtered going up against Vince. I was one of those people. What I didn’t count on and honestly never considered was the fact that Eric Bischoff was ready to reinvent wrestling by breaking all the rules. And he did so with such aplomb, such swagger, that it really caught folks off guard. I’ve ragged on Bischoff over the years, but make no mistake I have a lot of respect for what he did in the early days of Nitro. He gave away pay-per-view quality matches on a weekly basis, he gave away taped match results from the WWF, he wheeled and dealed and brought in big names. The man changed the rules and had zero fear in pissing folks off doing it.

And the guy he infuriated more than anyone was Vince McMahon.

Sure, the new canon spewing forth from the Network is that it was Vince vs. Ted Turner. That’s a total crock. It was Vince vs. Eric. They both had monitors hidden under their announce tables so they could watch what the other guy was doing; in essence, at times, they were paying more attention to each other than their own product! So to claim that there wasn’t a personal issue between the two is woefully inaccurate. Bischoff for sure wanted to drive Vince out of business. Vince probably wanted to kill Bischoff. It was obvious during to anyone watching in the late 90’s that this was the case, and honestly, as much as the two despised each other, fans amplified that in their minds. So if the day ever came when Bischoff showed up on Raw, it would be armageddon.

Remember…we’d already had the InVasion. We’d already had various WCW stars that we couldn’t have during that preliminary period such as Hulk Hogan, Kevin Nash, and Scott Hall show up and be disposed of before Bischoff showed up. So this was really the final, last gasp effort to see a war that we all wanted to believe was real, that more than that, we all KNEW was real.

It was the ultimate personal war.

And what did we get?

Some would complain about Bischoff showing up before he was even announced, saying hi to Booker T. I actually thought that made sense; if someone saw Bischoff, they could call their friends who may not be watching and tell them what was about to go down. That’s fine.

You know what wasn’t fine?

The rest of the angle maybe I’ll cover another time. Right now, just seeing that image again makes me shake my head and renders me incapable to continue.

And hey, look at that – I did do the induction with just one picture.

Guess I was just too angry to add any more.