While I was never the biggest Extreme Championship Wrestling fan on the planet, I did enjoy and will forever be grateful for Paul Heyman’s Philadelphia-based science experiment. A quick glance into the WWF or WCW around 1993-94 and you could see that pro wrestling was in the doldrums and in need of a reinvention. In my estimation, that happened due to two things:

When I was originally approached to write the sequel to the first WrestleCrap book, I knew there were realistically only two choices, both of them detailing the demise of the companies listed above. And while my publisher really wanted me to do The Death of ECW (because why wouldn’t ECW Press want that?), I couldn’t fathom doing such a thing. And the reason was it felt like unlike WCW, in ECW we had this little company with people that would do nearly anything to help it succeed.

It made them easy to cheer for, you know?

Shortly after both companies met their end, WWE swooped in and picked up the remnants for pennies on the dollar. And while WCW was by far the more popular of the two promotions, it was ECW that somehow got a revival as a weekly show promoted by Vince McMahon’s crew. It was miserable of course – realistically, how could it have been otherwise? It seemed unfathomable, but when the bell finally, finally tolled for the promotion, it was under WWE’s jurisdiction.

So how was ECW’s finale?

You’re reading an induction at WrestleCrap.com…what do you think?

In the interest of fairness, the quick sepia intro featuring tons of insanity from the original promotion did actually make me long for those days of yore. Sandman. Sabu. Super Crazy. New Jack!

Just seeing those men had my mind reeling…who would be in the final ECW match? Could we see Tommy Dreamer back? Raven? Stevie Richards?

No silly – you get this man: 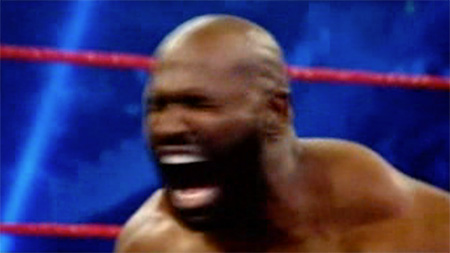 Was the Musketeer busy or something?

And who was calling the action? Thinking Joey Styles, maybe Joel Gertner? 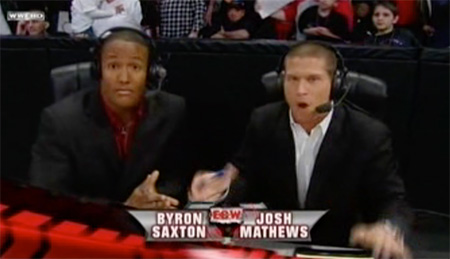 I’m starting to get the feeling this isn’t going to be a very extreme send off.

And in fact, we don’t even go to a match before these geeks start promoting the show that is going to replace ECW, which believe it or not would be… 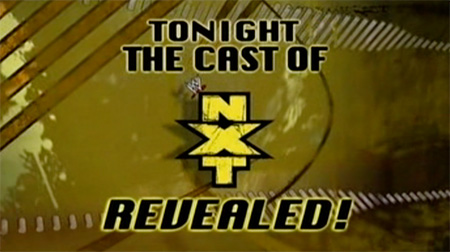 And it kinda sorta really sucked.

You see, this was where a bunch of “rookies” had WWE pros guiding their careers, put together in such a way that fans pretty much wound up hating everyone involved. And you’ll start to discover why later tonight! 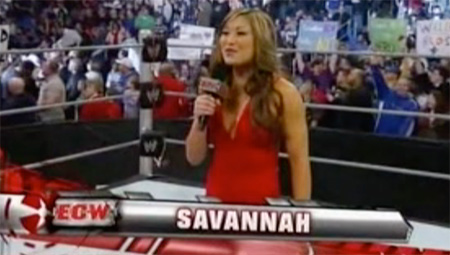 To the ring we go, and “Savannah” is doing introductions. I kinda pride myself on pro wrestling history (I made an ECW Musketeer reference above for crying out loud!), but I literally have ZERO idea who this is. Was she only on this show? Someone give me the storied history of Savannah below in the comments, please. 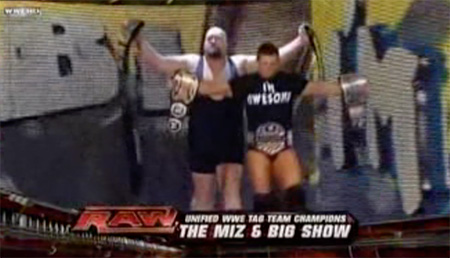 We get a tag team title match to start things off, with the Miz Show defending the straps. If you ever wanted to explain to your friends just how long Miz has been floating around the midcard in this company, you can blow their minds by telling them he was in ECW. 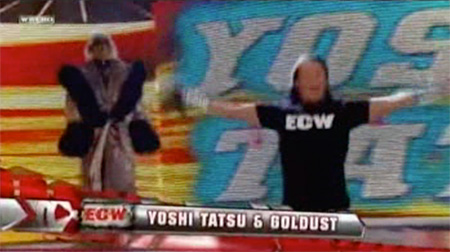 Their opponents would be the hardcore duo of Goldust and Yoshi Tatsu, who is definitely extreme. I mean look at him – he’s wearing an ECW shirt (likely picked up from the clearance rack).

How much more extreme could you possibly be?

And holy crap, his theme music is the most absurd, cartoonish crap you ever did hear. It sounds like something Gex would have run around to on the original Playstation.

I may need to make that my ringtone. I suggest you do the same. 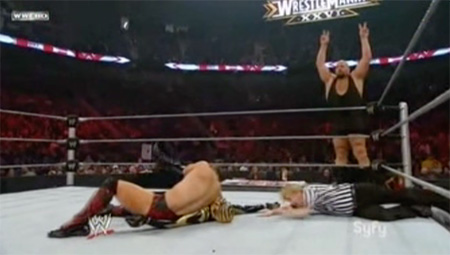 So the two teams have the most basic, boring, WWE tag match imaginable. And it ends with Miz hitting the skull crushing finale for the win. So yes, kids, eleven years ago, he was a tag champion, just like he is today. Or was last week. I won’t lie, I quit paying attention. But my guess is in eleven more years he’ll probably be in the exact same spot and I’ll be complaining about it exactly the same as I am today.

Time to hear about the Pros and Rookies on NXT! 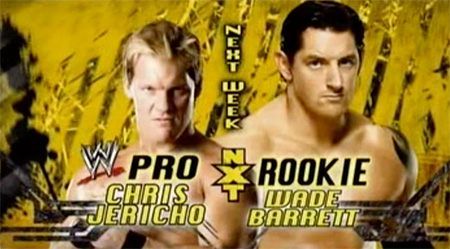 So Chris Jericho will be guiding the career of young Wade Barrett, who we are told is “wanting money and will do anything to get it!” Was his original gimmick that of a bank robber? If so, I somehow missed that. 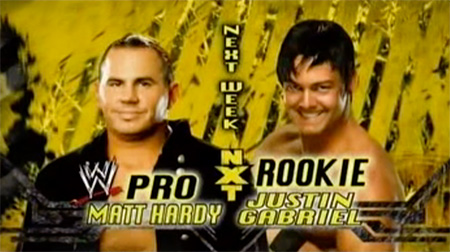 Matt Hardy is the mentor of Justin Gabriel, “a dynamo of energy, a cross between Matt Damon and American Idol‘s Adam Lambert!” I get the feeling that is less a sentence than a random collection of words, one I am too lazy to Google and determine if they actually fit together in any cohesive form.

Also, how weird is it to see Matt Hardy just smiling and looking normal? That’s almost creepier than the whole spiel over the last few years of him being broken. 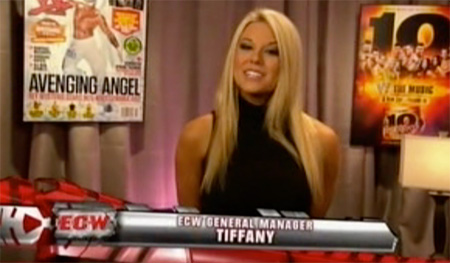 Oh me oh my how I love this woman. Remember when for like a year straight anytime something was great I’d post this picture? 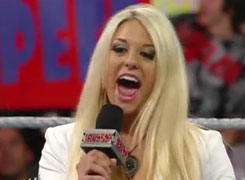 And remember how eloquent she was and how she enunciated every single syllable perfectly? Who could forget when ECW was going to go out of business when she told everyone on the staff that losing their jobs wasn’t a bad thing, nor a good thing, but rather a GREAT thing?

I LOVE THIS WOMAN AND SHE NEEDS TO BE BACK ON MY TV IMMEDIATELY. 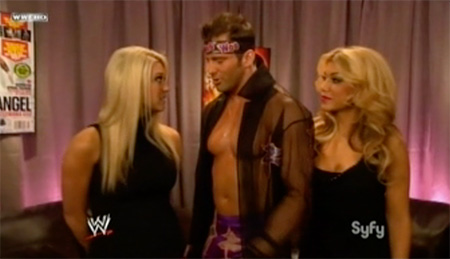 For tonight, however, she is explaining to all of us watching that NXT will feature “eight aggressive and opinionated rookies” in a way only she can. Sadly, she is interrupted by Zack Ryder, pre-Long Island Iced Z, who asks a great question: why on earth would Christian and Ezekiel Jackson be in the final ECW title match?

Unfortunately, he follows it up by saying that HE should be in the final ECW title match.

You said it, kid from the USS Intrepid! 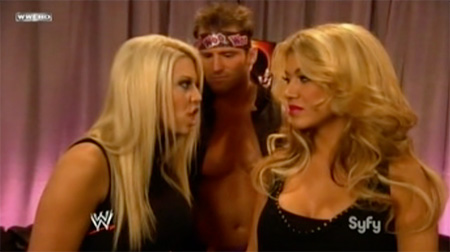 Rosa Mendes lays down a challenge in Espanol, to which sadly Tiffany replies in English. I can only imagine how awesome her Spanish would have been. Maybe sometime we could go to Chuy’s and get some TexMex to find out. 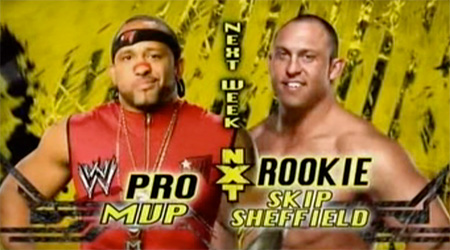 We get more NXT pairings next, with us being told that MVP will be mentoring some skinny dork named Skip Sheffield.

I kinda feel like it would be topical to make a joke about a poll and him retiring, but honestly, that’s beneath me and my high brow humor.

I’d like at this point to bring up the fact that we’re almost halfway through this ECW finale and we’ve only had one match. I mean, while I don’t really want to see Zack Ryder versus some D-level WWE enhancement guy, I’d much rather see that than… 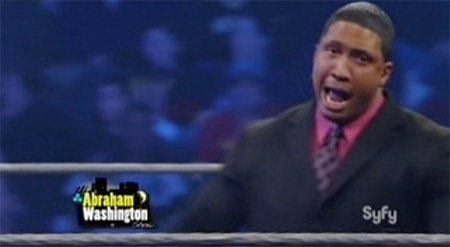 I inducted that already, right?

Why yes, I sure did.

Now if you don’t want to go out and read that past induction, here’s the gist: a guy named Abraham Washington (who has since seemingly vanished off the face of the earth) would come out and do a mock late night show. The only saving grace of this was Tony Atlas doing the dirt worst Ed McMahon impersonation you ever did see (and holy crap am I dating myself with that reference!), laughing at complete random and just being a total buffoon.

On this episode, Abraham introduces a very special guest, the best guest he’s ever had he notes. This guest would of course be himself. Then we get yet another tired WWE trope, namely Guy A coming out (in this case Shelton Benjamin) followed by Guy B… 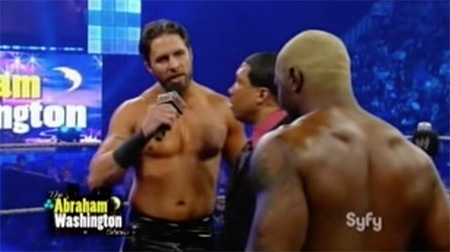 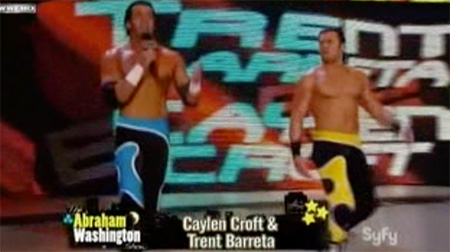 If that wasn’t weird enough, the AEW cavalcade continues as TRENT shows up too! I’d like to think his Mom was waiting out back with the mini van running waiting for his match to end. 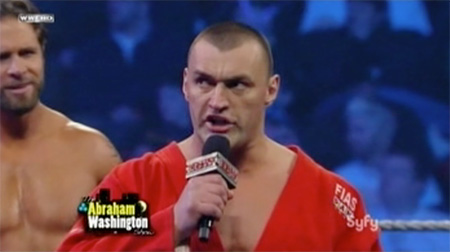 And just when you thought this ship hadn’t quite hit a large enough iceberg yet, here comes Vladimir Kozlov, who promptly destroys everyone for no real reason. But hey, it ended that dumb portion of this dumb program so I guess I should buy a shirt to show my support for him too. 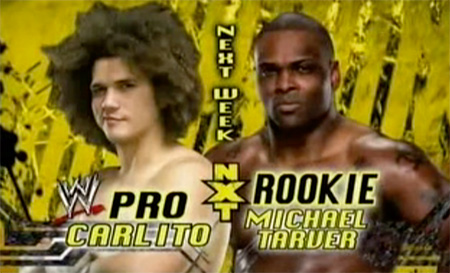 Back to the Pros and Rookies, as we get Carlito and Michael Tarver, another guy I have almost zero memory of. Sounds like a guy Blade probably would have known since we’re told his dad was a sparring partner of Mike Tyson. 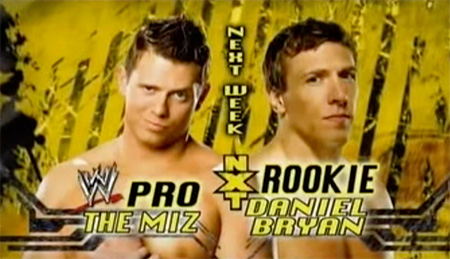 Now THIS I do of course remember, because it caused such an uproar when it was originally announced that Miz would be the guide for ROH superstar Brian Danielson, cleverly renamed Daniel Bryan. To this day, it is still one of the douchiest slaps to the face of hardcore fans WWE has ever given. Just a complete and utter troll job. 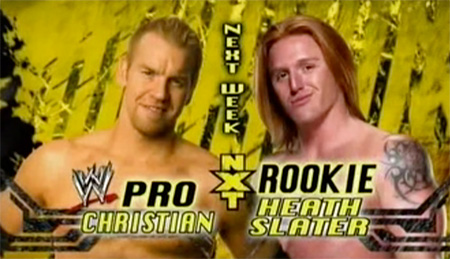 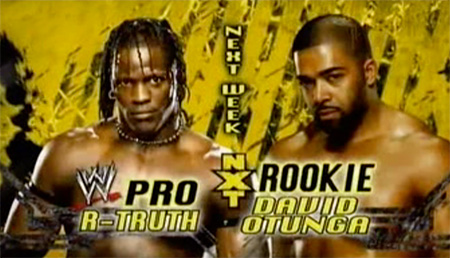 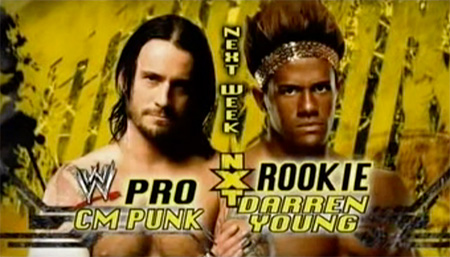 …along with CM Punk and Darren Young. Somewhere, I’d like to think Bob Backlund will see this photo and decide to make Darren Young(‘s hair) great again. 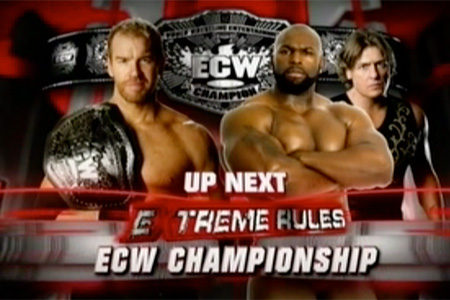 Finally…FINALLY…we get to the last match in ECW history, with Christian vs. Zeke in an Extreme Rules Match. And we all know what that means, which is…

…hold on, what on earth is Regal wearing in that photo? Seriously, is that an animal print vest? If WWE is serious about becoming “like Marvel” as they claim, I sure hope they have someone better in mind to play Kraven the Hunter than William Regal. 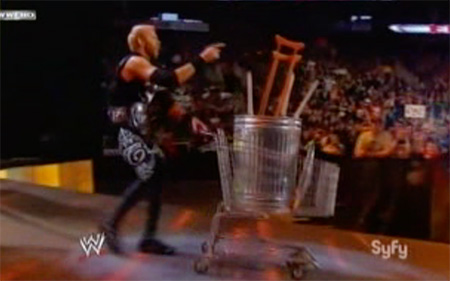 So this match is exactly what you’d expect from a WWECW encounter, with Christian coming down to the ring with a grocery cart of gimmicks… 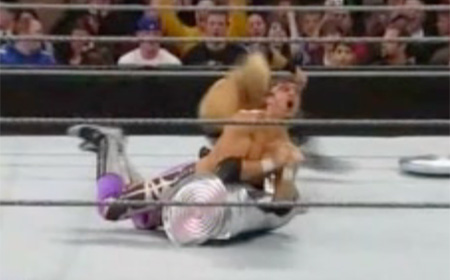 …Zack interfering and getting thrown into a garbage can… 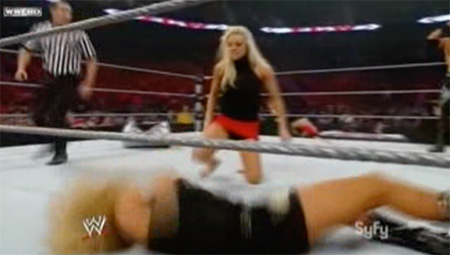 …and Tiffany and Rosa having the most timid “catfight” imaginable.

Oh, and if for some reason you thought maybe this company would want to send off ECW and its fans in a happy manner? 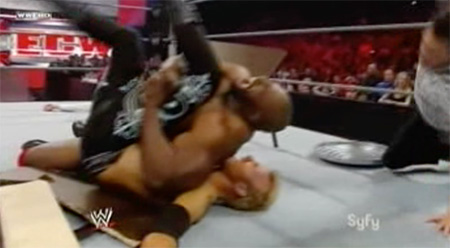 No, let’s have Zeke pin Christian for no reason to put this promotion into the ground once and for all.

And that, kids, was the bitter end of ECW. While some would claim it died years early (and count me amongst them), this was the last heap of dirt thrown on its remains. Anything but a memorable finale, but seriously, were you expecting anything else? 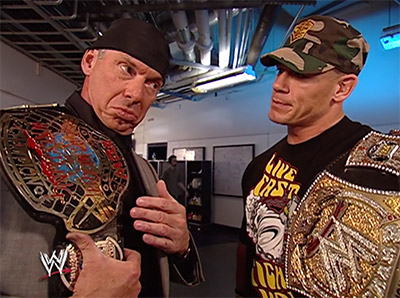 Yeah, I didn’t think so.

Jeff Jarrett And The Fat Ladies