Well, I have to admit I was wrong. Heading into the Death of WCW debate between Eric Bischoff and Wrestlecrap’s own RD Reynolds, I took Eric’s word for it that RD would be so traumatized by the experience that every time he attempted to type, his keyboard would short-circuit from the ensuing flood of urine.

That meant that I would have to start writing an induction every week to compensate for RD’s incontinence-fueled retirement. And a gainfully-employed guy like myself can’t keep up that kind of pace without taking a few shortcuts along the way, such as revisiting some old favorites from the infancy of this site, back when the Mantaurs and Godwinns of the world yielded only a hundred or so words per write-up.

Well, the joke’s on me, as our pal RD is still in full control of his excretory system (or wearing a very discreet catheter) and able to continue writing his usual bi-weekly induction.

So what am I to do, then, with all these updated write-ups of guys inducted onto the site nearly two decades ago? Why, stick ‘em behind a paywall, that’s what!

You’ll need to become a patron of Wrestlecrap on Patreon to catch every re-induction that trickles out, but this week I’ll kick things off with a freebie. Remember this momentous day, as it’s the very first time anything on Wrestlecrap has been inducted a second time.

Well, except for the time I wrote up the Billy & Chuck wedding again, but that was an accident.

Anyway, this one’s about Aldo Montoya. Read it.

Poor Peter Polaco couldn’t catch a break. Actually, that’s not exactly true. He caught a few breaks in the WWF, but each time, his momentum was immediately halted by something really stupid. 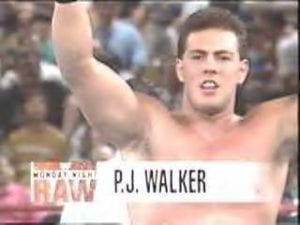 Take his early days as a jobber in the WWF named, “PJ Walker”… 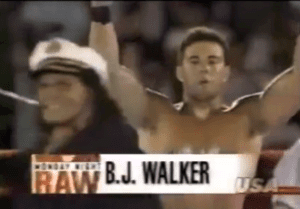 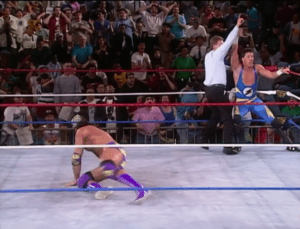 In May, The Kid pinned Razor Ramon and became the most talked-about wrestler in the WWF overnight, competing in Raw main events and pay-per-views in short order. 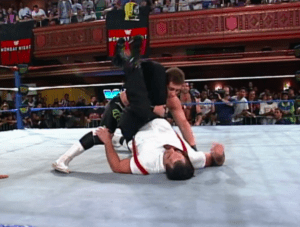 In September, Walker pinned IRS and went straight back to the thankless job of putting other guys over in near anonymity. 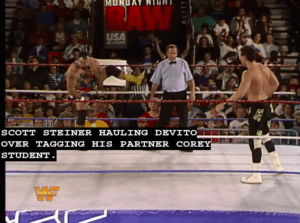 When Walker showed up on Raw again the following month, the owner of the company called him, “Cory Student” the entire match. 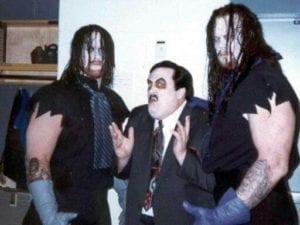 The following year, Polaco trained with Brian Lee when the latter was preparing for his run as the phony Undertaker. This time around, he got a full-time job with the WWF out of it.

Given Polaco’s Portuguese heritage, Vince McMahon and Pat Patterson saw an opportunity to make a splash in the South American market, especially in Brazil, where Portuguese is the official language. Polaco would be renamed, “Aldo Montoya”, purportedly to portray a soccer star.

That would mean Polaco would dress something like this: 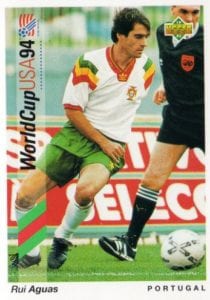 About a week before his debut, however, Vince tweaked his gear ever so slightly:

There was no way around it: 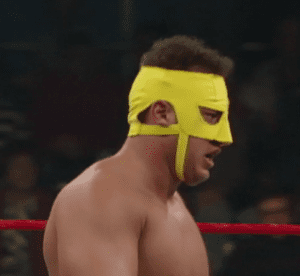 Aldo looked like he was wearing an athletic supporter over his face, with holes cut out for various orifices. 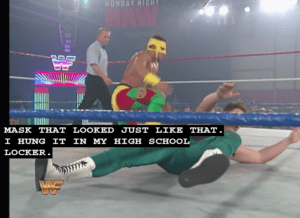 And it didn’t take long for folks to start pointing it out. Shawn Michaels remarked that he had had a mask like that hanging in his gym locker in high school, except it wasn’t a mask, exactly. 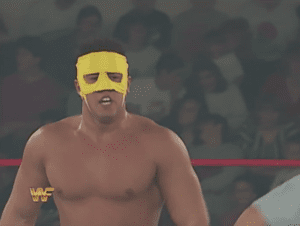 Mr. Perfect marked a rare pay-per-view appearance by Aldo by highlighting, in so many words, that Montoya’s mask probably reeked of stale testicles.

Portuguese Man’o’War is P.J. Walker, and got something of a push, wearing a Power Rangers type of ring outfit. [11/94]

Dave Meltzer generously compared Montoya’s gear to that of a popular children’s action character. The Yellowed Ranger, I suppose. 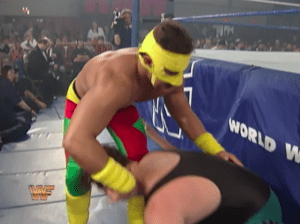 And the mask just had to be yellow, not red or green, two other colors in the Portuguese flag that aren’t the color of old cotton and piss. 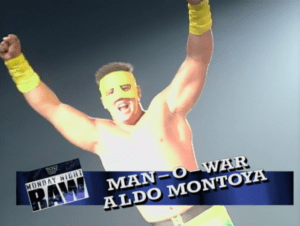 Aldo Montoya wasn’t just “Aldo Montoya”, either. From day one, he was given the impressive-sounding – or at least, very long – moniker of The Portuguese Man-o-War, Aldo Montoya. 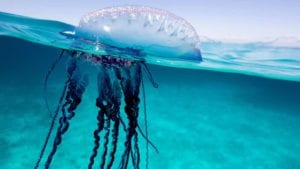 What exactly is a man o’war? It’s both a warship and a floating, jellyfish-like colony of marine organisms called polyps. The latter type of man o’war lacks both a means of propulsion and a brain, meaning it is both directionless and incredibly dumb. Sounds like a good fit for Aldo to me!

Aldo’s entrance theme was a reworked version of Luna Vachon’s, but sadly not the theme she used in WWF RAW for Genesis and SNES, which seems to have been invented out of thin air. 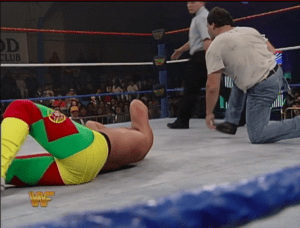 The WWF pushed Montoya to the moon for about ten minutes, with guest commentator Ted DiBiase being highly impressed with the Man-o-War’s debut outing against the Brooklyn Brawler. 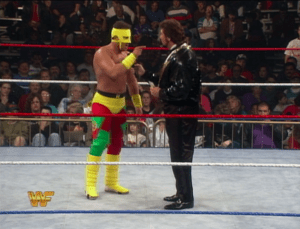 The Million Dollar Man tried to recruit Montoya for his Million Dollar Corporation, but Aldo’s initial response went over the fans’ heads, like he was speaking a foreign language or something. “I guess that was Portuguese,” said Vince. Right first time! 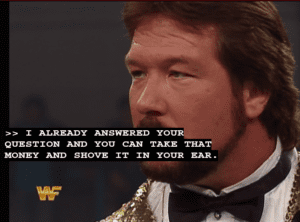 After some more prodding by Money Bags, the Luso native made his rejection clear in nearly perfect English, confusing only the word, “ear” with “ass”.

It would be the last time Aldo would be allowed to even pick up a mic.

No, I’m not kidding. 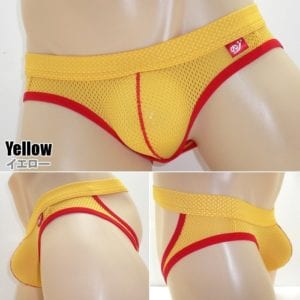 …or maybe it was the fact that no fan could ever take a guy with a banana hammock on his head seriously, but it was all downhill from there for Aldo. 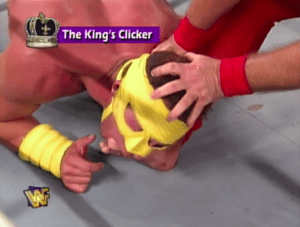 After rejecting DiBiase’s money, Aldo was quickly shuffled down the card, suffering such indignities as being forced to suck a man’s filthy toes, courtesy of Jerry Lawler… 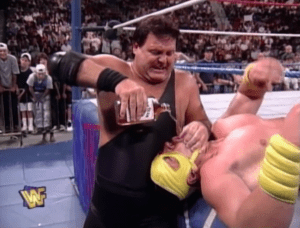 …and having whiskey poured down his throat, also courtesy of Jerry Lawler. 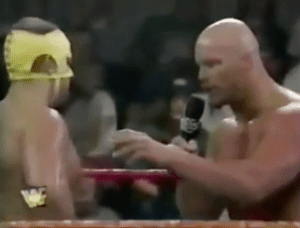 Aldo did score a victory over King of the Ring Stone Cold Steve Austin, but only because Austin was so insulted by being booked against him that he forfeited the match, then gave him a stunner.

I guess Aldo should have just taken DiBiase’s money after all. 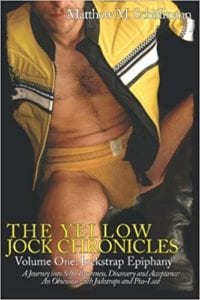 All in all, the miserable saga of Aldo Montoya shows just how much the business has changed since 1994. 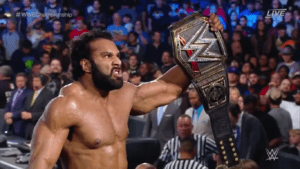 When Vince wanted to pop business in India, he gave Jinder Mahal the belt. 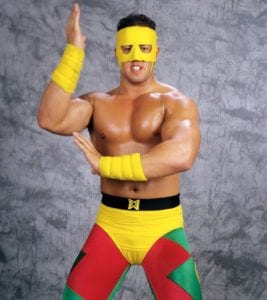 When Vince wanted to pop business in South America, he gave Peter Polaco a jockstrap.